Where does one even begin to try to process what just occurred on our television sets? As a writer, how do I even begin an article such as this? To be honest, folks, I have no idea. So I guess I’ll just start there.

What happened on our televisions last night was horrible. Awful. Traumatizing, and just… cruel. That’s not to say that it wasn’t good storytelling… I guess (I’m not yet emotionally ready to concede ANYthing good about the writers just yet… I hope their families and significant others make them sleep on the couch and sit at the kids table for Thanksgiving, and I’m not even a little bit kidding), as so many were so emotionally affected by it, but… it was not an easy hour of TV. I’m hard pressed to even call it entertainment. At this point I think calling it masochism would be more accurate.

I started watching The Walking Dead when it first aired. Through season 1 I watched week to week, and realized preeeetty early on that getting attached to characters was a bad idea. But it was too

late, I already had. I had fallen in love with the character of Glenn Rhee. He was young and funny and fearless and I just loved every second he was on screen. Over the course of the years, I started to realize that watching The Walking Dead gave me real and legitimate anxiety when I watched week to week, so hubby and I would binge each half season after it was over. Which was frustrating bc I hate spoilers, but sometimes in this one particular instance, knowing major traumas ahead of time was actually helpful for my sanity. And then last year after I’d been writing for Fan Fest for awhile, I got the brilliant idea to watch the finale live so I could write an article on it.

Of all the freaking times to start watching live…

So, I got to suffer along with all of you throughout the hiatus. I joined fan sites and counted footsteps. I listened to cleaned up audios. I looked at the positioning of the damn trees. I did the math. At times it was fun, and at times it was frustrating, but it certainly brought me closer to this amazing fandom. 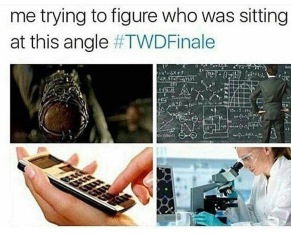 And then it was time for the actual episode to FINALLY air. And do you know what both my Facebook (people I know off line) and Twitter (fandom folks) timelines looked like? People who were EMOTIONAL WRECKS. I was a little concerned at how my anxiety spiked the hour before the episode was set to air, and was hoping it was just pregnancy hormones. But turns out, even those who aren’t hard core fangirls and fanboys and who just watch the show every week were maximum strength freaking out. My social media turned into a giant support group, both with fandom folks and civilians. It was a very, very real testament to the power of fiction in our current society, that is for sure.

Then it was time for the show to begin. I sent hugs to a few friends, got my 4 year old settled in away from the trauma TV, then set down my phone, hugged a pillow, held hands with my husband, and waited for the pain.

And pain there was.

Dread brings out interesting reactions in people. Seeing people experiencing the stages of grief began almost as soon as the episode began. Being 15 minutes in and still not knowing what was happening made people absolutely beside themselves with anger after having to wait 7 months. But then of course as soon as we found out, we wanted to un-find out, as the emotional pain (denial, depression) and just the gore was truly awful. The episode went so, so dark and was just relentlessly unforgivingly painful that that sense of dread didn’t lift EVER, even for a second. You couldn’t catch your breath from one trauma to the next, and I’ll be honest… I’m a crier (I’m pregnant… I cry at commercials at this point), and I didn’t cry. I was in too much shock from fictional trauma after trauma after trauma. Much like the characters on screen, I didn’t feel able to show emotion until after all of Negan’s people had left and the shock had started to fade. Until that point, the adrenaline was still going and the fear was still real.

I repeat: This is a television show, and yet the fear was still real. My chest didn’t seem to care that the threat was fictional and that it didn’t concern me or anyone I actually know. It was tight as hell, and my hands were shaking anyway. Human emotions don’t give a damn about logic.

At this point, I have watched the finale as well as The Talking Dead, and I’m in my bed at 1am writing this article trying to process things for myself. It’s hard. It’s a TV show, but it’s hard. Losing Abraham, who has bar none the best lines on the show and who was in such a good place mentally… it hurt. It hurt, but as a Glenn fangirl, after Abe was chosen and killed, I was able to breathe for a minute and at least be thankful that my boy was still there.

But then he wasn’t.

Having watched The Walking Dead for so long, I have a hard time picturing what it looks like without Glenn. His parts of the story were always my favorite, his attitude was calming and relatable, and his heart made the group believable even when it seems Rick toys liberally with the lines of sanity. I don’t know what that world now looks like with Glenn gone.

And that makes me sad.

Almost everyone in our society enjoys fiction in some capacity. TV, books, theatre, gaming… all of them bring escape and fun into our lives through stories of other worlds. At times those fictional characters can become like friends… those that we go back and visit sometimes, and in the case of current television shows — especially ones as long running as The Walking Dead — they’re friends that we get to visit with on a regular basis. We get comfortable with the idea that we’ll see them often. And so when an episode of The Walking Dead such as this one hits, it’s upsetting. Because we’ve lost a friend.

I’m well aware that Glenn is not a real person, and that in my day to day life, I have not had a friend die. But on my Sunday evenings, I will never again have

another interlude with my boy Glenn. I won’t get to see the look on Glenn’s face when he sees his baby, or see he and Maggie, one of my favorite ships, fight to save each other as they’ve done so many times. I won’t get to watch as Glenn inspires and encourages others. And dammit, I won’t get to hear Abraham talk about dicks, which was also a ray of happy in my world.

And I’m okay with that.

Life is hard, and 2016 as a society has been one of the hardest. Having this level of trauma in a television show ON TOP of the crap sandwich that is this year isn’t exactly ideal, but I’ll tell you what… sometimes crying or expressing a strong emotion over a work of fiction can be truly cathartic in helping us handle the tough emotions about “real” life. And so I will cry for the injustice that is Glenn’s death (while giving nasty looks to Daryl for awhile… hey, feelings are feelings), and know that the tears I’m shedding aren’t just for Glenn, but for a lot of the injustice I see in the world but get overwhelmed with. I cry for Abraham, but know that I’m really crying for all the strong people I know who have died over things that could so easily have been resolved a different way.

And that’s why I don’t apologize for the level of emotion I feel or express about fiction. All that emotion is in there, whether I watch The Walking Dead or not. But watching and reacting at least helps that stuff come out in a much healthier way than it otherwise might’ve (such as screaming at family and friends about politics). Trust me, everyone would prefer me to express my emotions through fandom.

I’d also like to thank Chris Hardwick and The Talking Dead team. Because I never watched the show live, I had never watched TTD before last night. But I can’t tell you how much watching it last night helped. While my logical brain knows that Glenn is fictional, and Steven Yeun is an actor, being able to see them all on stage weirdly helped me in processing my feelings about the episode.

And getting to hear the actors talk about their own feelings about things (which, btw, Chris Hardwick officially has the coolest job in the universe… processing fictional trauma WITH THE CAST?! Omg you lucky bastard…), well knowing they were hurting too was also pretty helpful. I was also so glad to hear Chris say to the entire fandom that whatever you are feeling about what happened in the show, those feelings are valid. I’ve seen more people use mental health verbiage when talking about this television show (grief, depression, separation anxiety, processing) than I’ve ever seen before. Go ahead and feel what you need to feel, and process with those you trust at your own pace. The world supports you on this one. Take your time.

I also encourage everyone reading this and struggling today to remember that while Glenn and Abraham are gone, we are still alive. I think a lot of the reason why zombie apocalypse works of fiction are so popular is because it makes us thankful for the life that we have and reaffirms that we are alive, and/or it hits that darker part of our brain that kind of wishes it would happen so that all of those social constraints like work and taxes and dinner parties could be a thing of the past.

But I have to say, despite the current political climate, the global instability, environmental issues, violence, and general awfulness that is life right now…. we are definitely having a better time than Rick Grimes and his crew. So once I get done crying for Glenn and trying to find a way to convince myself he can come back (IT WAS ALL MAGGIE’S FEVER DREAM, RIGHT?!?!), I’ll try to remind myself of that and be thankful for all that I have, no matter how crazy this year seems.

Hugs to you all!